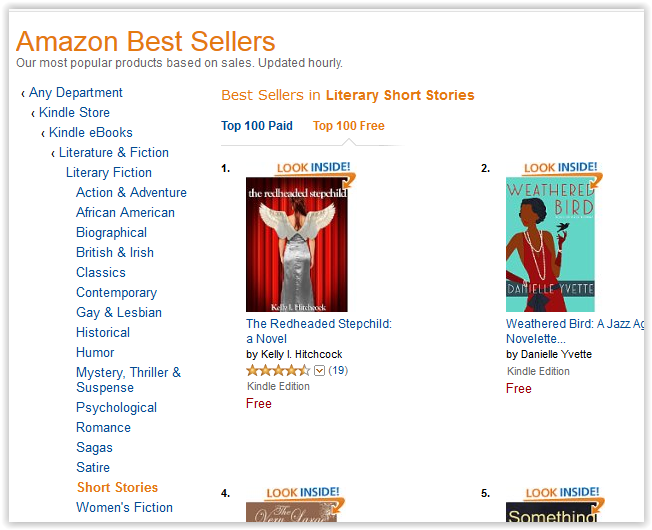 Yes, I had to capture the photographic evidence…

I put The Redheaded Stepchild up for free yesterday, to celebrate the 1st birthday of Portrait of Woman in Ink: A Tattoo Storybook. It got over 125 downloads yesterday, and made it up to the #1 spot in the Top 100 free books in its category on Amazon. You haven’t missed your opportunity yet; it’s still going to be free for the rest of the week!

Go grab yourself a copy. Portrait of Woman in Ink is a year old today! Just a year ago I was feverishly promoting the initial release of my new book of short stories about women and their tattoos and trying to keep up with the buzz as my closest people supported my efforts. It’s been a good first year for Portrait of Woman in Ink, but there are many more good ones come! It’s like Christmas in July; even this guy popped by to wish Portrait a happy birthday…

To celebrate, I’m making the Kindle edition of my first book, The Redheaded Stepchild, free all damn week! Grab a copy if you don’t have one. If you have one, grab a copy anyway (um, they’re free) and gift it to someone you love or like just a little bit. When Portrait of Woman in Ink is a little older and wiser, it too can be given away for the low low price of free.

Spread the word, get my books (one a year old today and one free), and enjoy the swelter of summer! Have I told you people I love you lately? Well, I do.

5 Comments
Portrait of Woman in Ink on Booknerderie

Portrait of Woman in Ink on Booknerderie

Howdy y’all! You came to find me here but today I’m over on the Booknerderie blog where the fine blogmistress Annette has just put in her two cents (and 4 stars) on the book.

Come check it out for yourself HERE.