Help me pick a title for my next masterpiece!

Greetings, loyal fanbase of fans! Today I sent the drafts of the short stories that are going in my newest collection to the people they were about. If you’re unfamiliar, I’m working on a collection of short stories about women and their tattoos. The stories are chained, meaning you meet characters in a previous story and learn more about them in the next.

I’ve been struggling to come up with a title, but I have a few ideas I’ve been throwing arond, so I want to crowdsource this one… tell me in the comments: which one do you like best?

Or, choose your own! 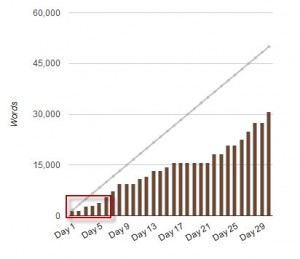 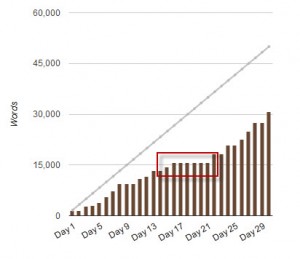 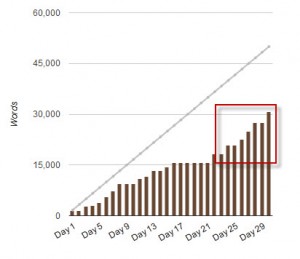 I’ve been working on the tattoo story collection I discussed a few posts ago. It’s been going very well, but it appears I am short of the 25,000 word count mark by about 11k. That tends to happen when you get new freelance clients every night for the first couple weeks, then have to go to a 3-day conference for your real job.

The main reason I wanted to do National Novel Writing Month was because I had a project I was crazy excited about, and I wanted to start getting it down before I lost that initial excitement. Perhaps more importantly, though, it took me seven years to write my last book, and I don’t want it to take another seven years to write my second. NaNoWriMo is great for me, because it forces me to find the time – often time I don’t have – to write something, anything, any day. As a result, I’ve written on the city bus, in coffee shops during meetups, on my lunch breaks, while watching college football recaps, you name it.

Part of the problem I’ve had with NaNoWriMo is that the process needs to be fast, and my process is typically much slower. I’m a big edit-as-I-go kind of person; it’s how I’ve always been and why I think my editing phase is a little easier. It’s difficult for me to write something I know I don’t really like, am going to have to change later, and just leave it and move on. It may prove useful though, because when I do come back to this in December to start editing (yes, I am an optimist), I’ll have a little more dramatic distance than I typically have when I edit as I write. No process is ever going to be perfect, though, so I guess I’ll take the productivity in exchange for the rework I’ll inevitably have to do later.

It’s likely that I won’t get to 50,000 on time, but I’m not overly concerned. I’m happy with the progress I am making and I think the prose is really well done so far. I’ve also been getting some great feedback from my meetup group members, which I will feature again soon.

New poem up. They should call it NaPoWriMo.

Well, it’s National Novel Writing Month, but I am not writing a novel. I have several reasons, all of which I can back up with my own flawed logic. Regardless, I did set a goal for the month, a goal to finish all the works in progress that plague me. My second goal was not to start anything new until I accomplished the first goal.

So far, I have broken both goals. I have only finished one work in progress, and I wrote a new poem. What can I say? I just kinda happened. Besides, you can’t stifle inspiration when you are lucky enough to get it. Anyway, I was down in Springfield, MO, my old stomping grounds back in college, and I drove by the bar I used to go to several times per week back in my heyday. It was “our bar”, with the other half of the our being my ex-husband. The building is vacant and looks exactly the same.

It inspired me to use it as a metaphor for the dumbest decision I ever made. It’s called Culley’s Pub: An Elegy. Check it out.