Community Klepto is coming to a bookshelf near you, courtesy of She Writes Press

After COVID reared its ugly viral head and caused my prior publisher to shelve all its projects, I thought long and hard about what I wanted for my book. I’m biased of course, but I knew it was a polished, funny, marketable book (it wouldn’t have had two offers to publish it already if it wasn’t). Not wanting to sell myself short, and feeling like I had nothing to lose, I submitted COMMUNITY KLEPTO to She Writes Press, after reading that it took the prize of Independent Publisher of the Year in 2019. I also started aggressively querying other publishers and agents, not letting the sun set on a day where I submitted less than two queries.

A couple months later, I woke up to an email from She Writes Press saying they wanted to publish COMMUNITY KLEPTO. Today, I made it official and signed the contract, making me She Writes Press’s newest author! COMMUNITY KLEPTO will be released sometime in the Spring of 2022 (hopefully by then, things like in-person book signings and launch parties won’t be frowned upon by the CDC).

It goes without saying that applying my signature to a book deal is the easy part and now 18 months of hard work begins to bring my newest book into this world, and I guess it also means that I’m finally going to have to go back to my hair salon since my last cover photo is now a decade old. Mask up, stay safe, and follow along on my ride as a SWP author.

About She Writes Press:

She Writes Press is an independent publishing company founded to serve members of SheWrites.com, the largest global community of women writers online, and women writers everywhere. She Writes Press is both mission-driven and community-oriented, aiming to serve writers who wish to maintain greater ownership and control of their projects while still getting the highest quality editorial help possible for their work.

In 2014, SheWrites.com and She Writes Press became part of SparkPoint Studio, LLC, creating a powerful combination that no other hybrid publisher brings to the table, including a strong editorial vision; traditional distribution; two award-winning hybrid imprints (She Writes Press and SparkPress); and an in-house marketing and publicity team through its publicity division, BookSparks. The SparkPoint Studio family is a female-run company with a strong vision, passion, and work ethic. In 2019, She Writes Press was named Indie Publisher of the Year.

Leave a Comment
Portrait of Woman in Ink free for Kindle! 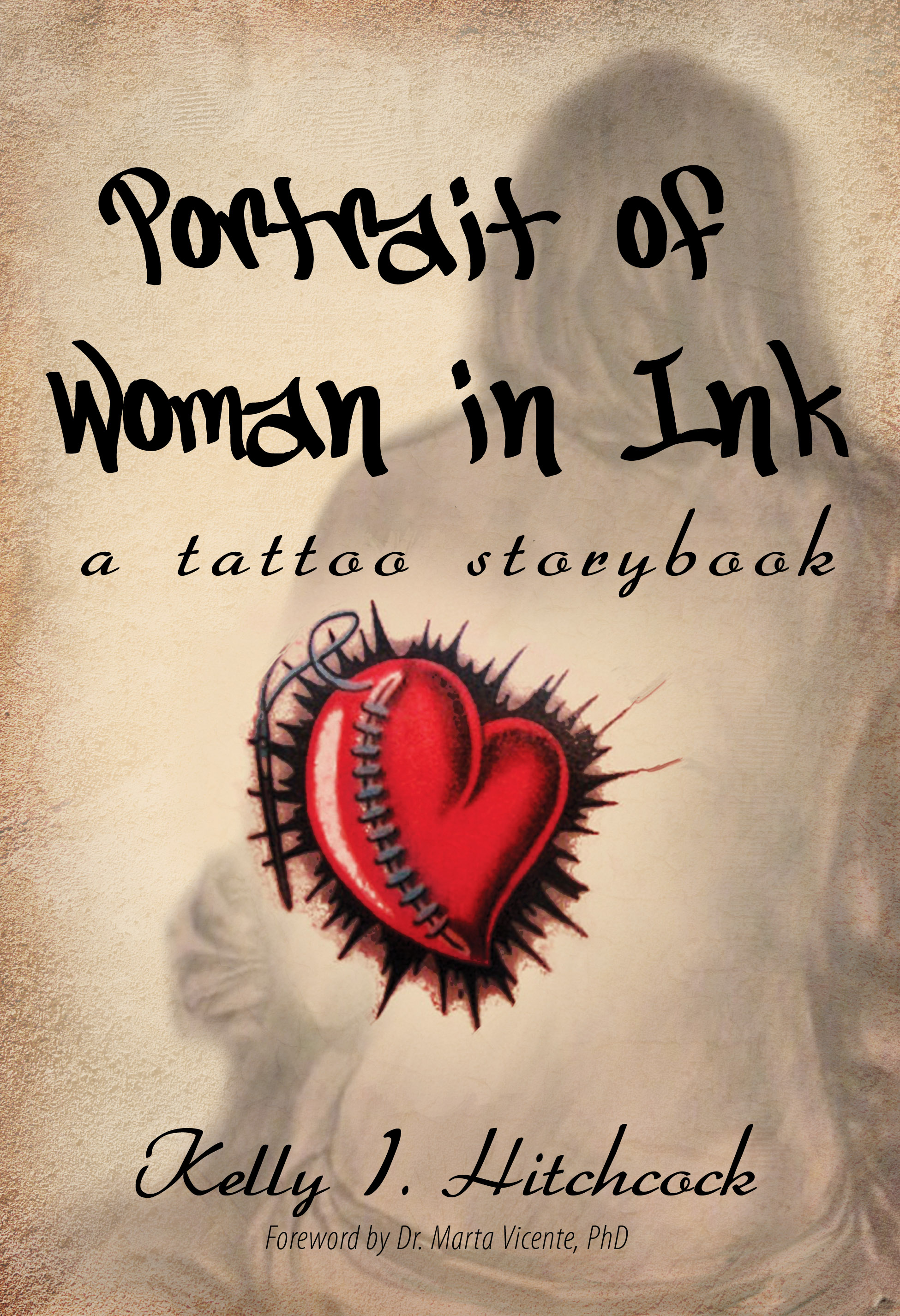 Good morning all my Kindle-loving friends! Today is your lucky day because you can get my latest novel, Portrait of Woman in Ink: A Tattoo Storybook for free in the Kindle store. Tomorrow and Thursday are your lucky days, too, because it will be free then as well (so tell your friends). This is a new edition of the book that includes a sneak preview of my work in progress novel Community Klepto.

Get it HERE and get it now!

.. and do me a solid – leave a review after you read it. The Kindle gods will shine upon you if you do.

3 Comments
Portrait of Woman in Ink available in paperback

Portrait of Woman in Ink available in paperback

After some deliberation and figuring out what to do with Portrait of Woman in Ink: A Tattoo Storybook now that my contract with my publisher is up. Since I’m in the middle of a career change, uber-frequent visits to my doctor, and deep in the throes of editing my third novel, I opted to go the way of the Amazon and just put it out there as part of my growing “backlist.”

I was partially lucky because I had already done the long, time-sucking work of formatting a print copy of my manuscript: sections, section headers and footers, right-facing pages, page numbers, front matter, back matter – pretty much everything you don’t have to worry about for electronic format books. Even so, it still took a good couple weeks of back and forth with CreateSpace to get my cover positioning just right, which proved to be a frustrating couple of weeks. But at long last, the print paperback is complete and available everywhere (CreateSpace print paperbacks are sold).

So if you’d like your very own dead tree version to add to your Kelly I. Hitchcock collection of works, you can find it here!

4 Comments
Portrait of Woman in Ink on Kindle Unlimited

Portrait of Woman in Ink on Kindle Unlimited

Now that Portrait of Woman in Ink: A Tattoo Storybook is in my purview, I’ve enrolled it in the Amazon KDP Select program. This probably doesn’t mean anything to you, unless you’re an Amazon Prime or Kindle Unlimited subscriber. If you’re an Amazon Prime-ate, you can borrow my book from the Kindle Owner’s Lending Library for absolutely free. Because this is America. If you’re Kindle Unlimited folk, you can buy it for zero dollars and zero cents.

It’s a beautiful thing. So check it out.

I have a fan club!

… and believe it or not, it’s not the first time.

My BFFF created a fan club for my authorisms on Facebook if you’re into joining the fun.

Interestingly enough, I once had a Facebook fan club way back in college. I have no idea how it started, but it became a thing and I eventually dissolved the group due to the fact that I no longer interacted with any of the people in it. This time, however, the fan club is run by someone other than myself, so it will actually be a legitimate fan club and shit.

Maybe there will even be a P.O. Box so you can send fANthrax mail.

Mark your calendars, Austin peeps! I’ll be making an appearance at Malvern Books for their June Novel Night event, reading from Portrait of Woman in Ink: A Tattoo Storybook and talking about my work. Come join in the fun and you can say you saw a rare appearance by the one and only Kelly I. Hitchcock (though not rare entirely by chance). 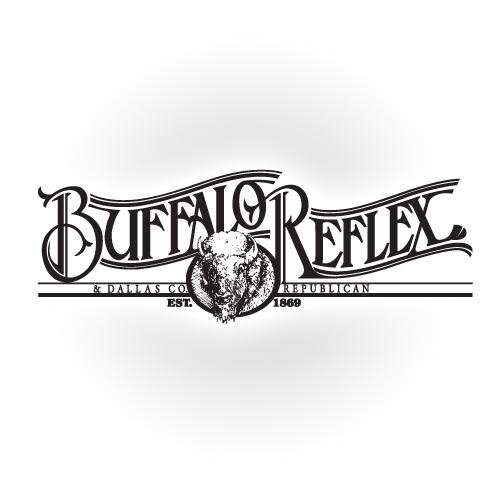 Author Feature in the Buffalo Reflex

Oh, hello! You came to find me but today I’m over at my hometown paper, The Buffalo Reflex, talking to the good folks there about what I’ve been up to in my author career since I departed the halls of Buffalo High School 15 years ago.

Check the story out here.

Side note, it was hard to do this interview. My first book, The Redheaded Stepchild, is set in a small town in Minnesota but anyone who knows me could easily figure out that the portrait of this small town in heavily influenced by Buffalo, Missourah. Yes, the book is fiction. Very very very much fiction. That said, the fictitious characters in the book bear more than a passing resemblance to the people who helped shape my formative years, and my formative years were all in Buffalo. I have a feeling my ears will be ringing as people in my hometown pick up the Friday paper and see what I’ve been doing with my life.

P.S. You may or may not have noticed that I got myself a sassy new head shot. A big thanks to Danielle Selby of PASADYA for the great work! (She’s a freelancer for hire if you need some design work of any kind!)

Portrait of Woman in Ink on Word Menagerie

Oh, hi! You came to find me, but today I’m over at the Word Menagerie book blog where the lovely E.J. Hanagan has written a lovely review of Portrait of Woman in Ink: A Tattoo Storybook for all their readers.

Go check it out HERE, and support your book bloggers; they support you! 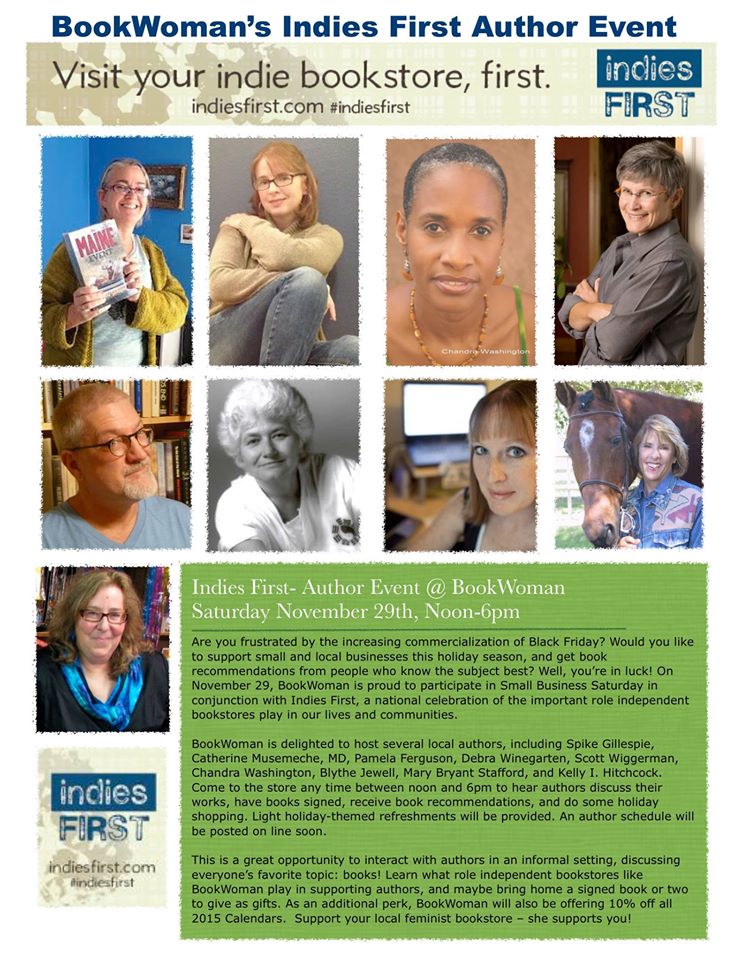 Small Business Saturday was a big day for me. I did my second book reading at an “Indies First” event at the first bookstore I had the guts to approach about Portrait of Woman in Ink – BookWoman on North Lamar. It was a fantastic event and I had such a great time sharing with this great group of people and reading from my book.

Since it’s Thanksgiving weekend, I got to drag the whole family along – my husband, my mother, and my sister. I’m tweeting here, not playing on my phone, I swear. 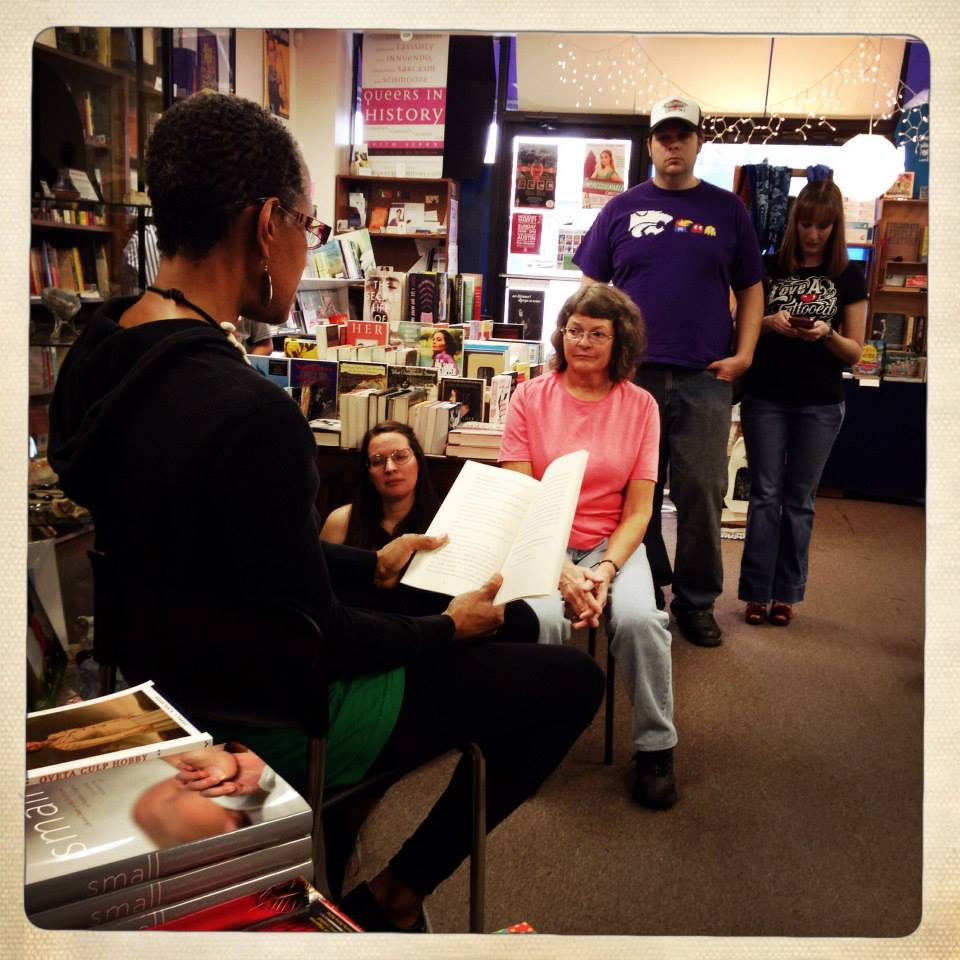 A big thanks to BookWoman for having me, to the other authors for making this a great event, and to all the people who came out to join in the fun and support these local authors!

6 Comments
Portrait of Woman in Ink at Malvern Books