Today on the blog, I welcome fellow author Deborah Court, spinner of paranormal romance tales. She’s here to tell us about her awesome new novel, Bound to the Prince. 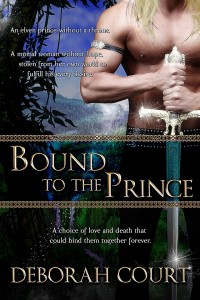 An elven prince without a throne.
A mortal woman without hope, stolen from her own world to fulfill his every desire.
A choice of love and death that could bind them together forever.

Some people believe that beneath our own world, separated only by a thin veil of human disbelief, there is another one – an ancient land of myths and legends, a place where magical creatures dwell. What would happen if one of them walked the streets of London at night?

Once a proud warrior, elven prince Elathan was living in exile, fallen from grace and separated from his own people. He wanted the mortal woman the moment he saw her standing on Blackfriars Bridge, staring down into the darkness with unbearable pain in her eyes. This strangely compelling female also happened to have luscious curves that made his body ache with desire. Naturally, he decided to hunt the woman down, drag her to his lair and command her to become his slave of pleasure. But would her frail human body survive a night of untamed passion in the arms of a Fae?

After a devastating breakup with her fiancé, Igraine Chandler was spending her honeymoon in England all by herself, her life utterly bereft of meaning. For who could ever love a plain, slightly overweight nurse from New Jersey with nothing left but a broken heart and her lost dreams of a home and a family? But she never imagined that she would soon set out into a world beyond her wildest dreams, and help a prince reclaim his throne …

EXCERPT from Bound to the Prince

Elathan stood at the edge of the lake, waiting for Igraine to serve him. “What do you want me to do, my Lord?” she asked, still avoiding looking at his private parts.

“Don’t you filthy humans even know how to wash?” he hissed impatiently. He gestured to the ornate table. “These vials contain soaps and oils. Use them to bathe my body, slave.” The prince stepped under the waterfall, rinsing off part of the mud, but it stuck to his skin and hair. Igraine sniffed at some of the bottles, inhaling their wonderful, unknown scents. Some of them were fresh, others musky, but clearly intended for use on the gorgeous body of the male who was showering right in front of her, naked. Water droplets glistened on his skin, running down from his chest to his flat, rippling stomach and still further down, gathering at … “Why do I feel like I’m in midst of a Cool Water commercial now?” she nervously murmured, wincing when the elf threw her a glance that clearly declared her a lunatic.

Sighing, Igraine took a small green bottle containing a soapy liquid and followed the prince. Elathan stepped out of his natural shower without even looking at her. Closing his eyes, he turned his broad back to Igraine, with the unspoken order to wash him. She poured some of the aromatic soap into the palm of her hand. The mud was diluted by the water, but it still ran in dark streams over the elf’s body, down over his hips and his muscular backside, dripping over his thighs. It collected in a puddle at his feet.

Igraine’s hands trembled when she reached out to touch him. “May I …?” she said softly. “What are you waiting for?” Elathan replied. Despite the harsh words, his voice was low and hoarse. She couldn’t see the expression of his face from behind, but she noticed his rigid posture. His contempt for her was obvious.

Taking a deep breath, she fought back her tears and started with his dirty hair, lathering it with the luxurious soap. Black, muddy water ran through her fingers and down her arms. When she had worked the soap into the whole silken length, she reached up to massage his scalp. Elathan stiffened before tilting his head back so she could reach him more easily. After she had washed all the mud out of his hair, she reached out to touch his shoulders, covering his pale skin with the soap.

Elathan stiffened even more, looking like a statue of stone now. Her hands wandered to the sides of his neck to wash the dirt away, then moved down over his shoulders, rubbing him in circles. His skin was smooth and soft as velvet over his rock-hard muscles. She longed to touch him, ferociously. No man had ever affected her so much. Just being close to him made her a weak creature, driven by the most primitive desire to mate.

Now that he couldn’t see her shamelessly staring at him, she was safe to admire his muscular back. It was built like an artist’s masterpiece. The scars marring his alabaster skin only enhanced his beauty. Without them, the sight would be too perfect for human eyes to endure. They were old, faint scars, diagonally crisscrossing all over his back. Igraine suddenly realized that the prince had been whipped, even if it had obviously happened long ago. Tears stinging in her eyes, she lightly traced the scars with her fingers while she washed his back. Although she didn’t dare, she longed to touch those reminders of his torment with her lips, kissing the ancient pain away.

Continuing with his waist, she found some very nasty grime there, sticking to the prince’s skin. As she rubbed his sides to get them clean, Elathan seemed to wince. She paused, but when he said nothing, she rubbed some more. He winced again, apparently trying to escape her touch. At first she stared at his back, baffled for a moment. Maybe he didn’t like her to touch him anymore. But then she understood.

Amazed by her discovery, she pondered about tickling him some more, but decided against it. She should not tempt her fate too much. Instead she reached around his waist and began to wash his wide chest, feeling his strong heartbeat and the heat of his skin. He was so tall that she had to press her body against his back to reach him with her arms. Moving down, she soaped his flat stomach, feeling the tense muscles under her fingertips. Elathan seemed to breathe more heavily now. For a moment, she asked herself what would happen if she dared to go even deeper, washing him … there. When she had finished and withdrew her arms, she glanced down at his butt. Heavens, this was too good to be true – so smooth, perfectly rounded and tight. She wondered if he would allow her to wash him there, too.

Suddenly a mischievous grin spread across her face. Well, even if he would kill her afterwards, this princely backside would be worth it. Now your ass is mine, Your Royal Highness, she thought. She just couldn’t help it. Then her hands touched his muscular buttocks, lathering the soap in small circles over the skin. Maybe being an elven prince’s slave wasn’t going to be so bad, after all. When Elathan moaned ever so softly, she couldn’t hold herself back anymore. A small giggle escaped her lips.

Strong hands grabbed her upper arms. Igraine was whirled around until she stared directly into Elathan’s furious face, his golden eyes burning with anger. Before she could move or utter a sound, he picked her up like a weightless doll and threw her into the lake.

All of this happened so quickly that she didn’t even have time to hold her breath. She sank into the dark water and struggled for a moment in panic. Then she managed to reach the surface and came up, coughing and gasping for air. Bewildered, she was still wondering what had happened when Elathan was suddenly in there with her, wading through the lake and quickly rinsing off the soap from his hair and body. His pitiless grin let her know that he found her distress entertaining.

“You!” she shouted angrily, shoving against his chest with both hands. The fact that his eyes widened with surprise gave her a certain amount of satisfaction, but not enough. “Prince or not, who the hell do you think you are? First you abduct and enslave me, threatening to kill me if I don’t obey your every wish and whim. You hate humans, and still you don’t bother to kill me. Instead, you seem to enjoy your little game of humiliating me. Why don’t you finally get it over with, elf? You incredibly arrogant, insufferable…”

He grabbed her wrists and bent her arms behind her back with a swift movement. Simultaneously, he silenced her with a hard, passionate kiss.

Many thanks to Deborah, who featured me on her blog a few days ago. Be sure to drop by her site and say hi!