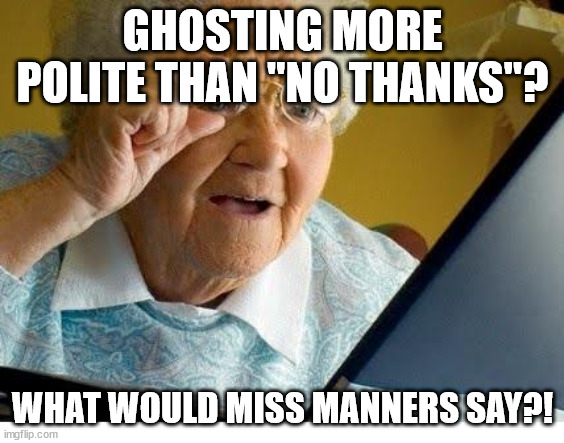 Maybe it’s just the geriatric millennial in me, but the concept of ghosting someone has always bothered the hell out of me. I’ve been on the receiving end of it from jobs, friends, romantic interests, and more publishers and literary agents than I can count.

And I’d be lying if I said I wasn’t guilty of it, too, though I try not to make a habit of it. But of course, there are those you’re better off not even trying to engage with for your own sake, like people who sell Mary Kay for a living.

Every now and then, I’ll get a string of book bloggers on Instagram wanting to review my book for a modest fee. I got a ton of these right after my book came out, and I recently got several more. Right now I am still riding on the new-ness of my book’s release, so I’m not ready to shell out for a paid book review at the moment, but I thought I’d file them away for later, so I replied to each one with a polite “What is your review policy?” which is a polite way of asking “What will you do for me, and what will it cost me?”

After the first one replied, with a predictable call to action “how does that sound to you?”, I replied honestly, saying I wasn’t interested at this time, but would consider it in the future. Back in my day, this was how we told people “this isn’t no; this is ‘not right now’.”

So imagine my surprise when the book blogger replied with an emoji (okay that wasn’t the surprising part… it is Instagram after all) – the one with the angry red face spouting expletives. It was immediately followed with a message: “No need to respond if you no intrest”

Tenuous grasp of spelling and grammar notwithstanding, I was taken aback, but when I talked to some of my younger author friends, they all said essentially the same thing – that if I wasn’t interested, I should have just not responded instead of saying thanks, but no thanks. That responding at all in a negative manner, even a polite one, was more rude than just saying nothing at all and leaving them in the lurch (after all, they’re the ones who cold called me).

Maybe I’m officially the old lady playing by outdated rules of etiquette and this is the new normal, or maybe (and I may be biased but I’m leaning this direction) they were the assholes in this situation, not me. Maybe I should put this on r/AITA and get an official judgment like the proper geriatric millennial I am. Or maybe I should just move on and not let it bother me so much; it’s not like I’m committing an unforgivable offense like putting two spaces between sentences.