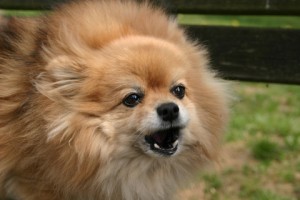 It’s been difficult getting back into the groove of things at the office, since the holidays and being sick last week.  I had this nasty sore throat for several days, but I finally got healthy and ready to get back to work.

Unfortunately, something has been distracting me when I already have this motivation problem – the little dog upstairs has been barking.  All day, every day.  And it’s got this yip-yap whine that makes it sound like it’s in mortal danger.  At first, my dog would whine when she heard the dog upstairs, but after awhile, she’s just kind of learned to ignore it.

I wish I could do the same.  Typically, I just turn up the podcast or the song I’m listening to and try to drown him out, but then I have a meeting where the only background noise I have is YAP-YAP-YAP-YAP over and over and over.  Normally, I would call the apartment office, but I’m a little hesitant to do so.  You see, my dog is part chow, and the Texas Apartment Association expressly prohibits any mix of breed they want to call “aggressive”: Akitas, Pit bulls, German shepherds, Dobermans, Rottweilers, and Chows.  Never mind the fact that my dog is scared of her own shadow.  So I told them she’s a Retriever mix, which isn’t a complete lie, but I hate to invite complainer karma lest someone decides they want to complain about my dog.

When the owners are home, the dog doesn’t bark, but it runs from one end of the apartment to the other all the time, which would make me wonder if it were thundering outside if only it weren’t Texas, where it rains about two days a year.  If I write the dog into a story and then murder it violently, I hope you all won’t think less of me if it turns up dead the next day.  I would think it’d be barking itself hoarse by now.